This brings back so many memories. I first started making them when I was a camper at Camp Beaumont. Just simple friendship bracelets, mainly just plaits. Then when I was a camp counselor at Campus Kids Connecticut my campers and I would spend our rest hour making them together. This Monday I walked in to work to find everyone in the playroom making some. They were trying to use a kit to make theirs, whereas I preferred the old fashioned way. In fact, I had finished mine by the time they had worked out how to make one properly.

Doing it old school while they figure out the “easier way”.

Make sure you follow my crafts for older kids board on Pinterest for more ideas. Don’t forget to save the pin for later.

You will need 3 colours of thread for this.

Cut the length that you need, remember it is always best to use more than you actually need.

Gather all the thread together, leave about an inch at the top before tying them in a knot.

Secure your thread to a table with some tape. This just makes it easier to work with.

Starting with the thread on the right, cross it under the middle thread so that it makes a number 4 shape. Next bring the thread round the middle thread and through the hole you created when you were making that “4” shape. Pull the thread. Don’t pull it too hard though. It should make a nice loop, kind of like a blanket stitch.

When you have finished doing that knot repeat the same using the left-hand piece of thread.  The middle thread is really only there as anchorage.

When you have done enough to go around the wrist, tie all the threads together in a big knot and cut the excess thread away.

You can use as many coloured threads as you like for this one. I used 4.

Cut your length of thread for each colour; tie them all together in one large knot about an inch or so from the end. Tape it to your table.

Sort out the order that you want your thread to go in. To start take hold of the first two strands on the left. The farthest one on the left is the one you will begin to knot with.

Take that first thread; pass it over the second thread and then behind and through the hole. Pull the first thread upwards towards the tape to create the knot. You don’t want to pull too hard though. Repeat this process again so that you have a second knot.

When that is done use the first thread to make knots on each of the subsequent threads. After you have finished making your second knot in the right hand thread, begin again using the new first strand on the left.

Repeat until your bracelet is long enough. When it is, tie it off in a big knot and cut off the extra thread.

For this one, you will need a few extra things – cardboard, a pencil, and a cup.

To make the loom draw around a cup and cut it out. Make a hole in the centre, and cut 8 slits at even intervals around the loom. I numbered each slot. You don’t have to; it just made it easier for me.

Choose 7 pieces of thread and tie them together in a big knot. Slip the knot through the hole in the middle of the loom so that is on the backside of it. Place the threads into each of the slits with the rest of it hanging down. There should be one spare place.

Repeat until your bracelet is long enough. Take the threads off the loom, tie them in a knot, and finally cut off the extra thread.

You are meant to keep your friendship bracelets on for a year before you take it off. I think I had one bracelet from camp on for a year and another one a friend sent me for 5 before it fell to pieces.

If you liked learning how to make these simple friendship bracelets be sure to check out my noodle hockey and postcard diaries. 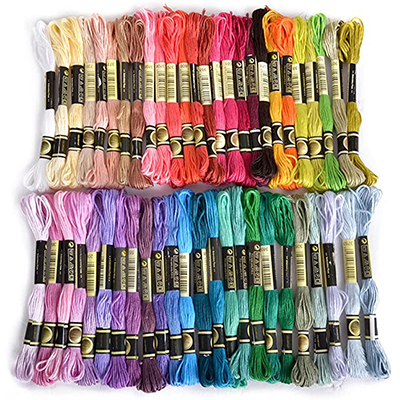