When we signed up for Cloud Nine Glamping in Dorset it’s fair to say I had my reservations. I’m not a fan of tents. I’m not a fan of camping, and I’m not a fan of using public toilets or showers, especially in the middle of the night. And then, the week before our stay, I read the reviews in the papers. After a discussion with my husband as to what to do, we decided that come what may, the kids would love it, and the summer holidays are all about the kids, right? We were going.

Plan your trip before you go

The pre-trip admin side of things via Cloud Nine’s website and online services is brilliant. You can book spa treatments, kids’ activities and restaurant visits in advance, planning your entire itinerary online, so you have a good idea of how your week is going to pan out. Easy to do, all very impressive. So far, so good.

The Cloud Nine Glamping campsite is based within the beautifully picturesque grounds of St Giles’s House in Wimborne, situated on the edge of Dorest, so it only two took hours to get to – ideal travelling time with two young children aged 2 and 4. (And close enough to return back home easily enough if required, I thought to myself as we got closer to our destination.) The drive was easy, and the highlight was taking a route through the New Forest, where the kids enjoyed spotting wild animals.

We arrived in Dorset just before check-in time, at 3 pm. The queue to get checked in took around half an hour, and then, with family and stuff, we boarded a motorised buggy with a trailer on the back, and one of the concierge team took us our tent. The golf buggy was a huge highlight for the kids, they got such a kick out of travelling in it.

As we trekked out of the car park and into the campsite on the back of the golf buggy, my apprehension about the trip began to fade, pretty quickly. The campsite was spacious – and CLEAN! I noted with approval. Looking around, ALL of the tents, both big ones and small ones were spaced out so you had room to be on your own with your family, without coming into too much close contact with anybody else. A huge tick in the box, especially during a pandemic, I marvelled.

What’s more, EVERY tent at Cloud Nine in Dorset had its own toilet. They’re either portaloos or ensuites! Ours came with a portaloo, situated discreetly around the back of our teepee, and on inspection, it was clean, unused and fully stocked with toilet roll. And sanitiser. Another big plus. No sharing with strangers! Glamping was starting to have a certain appeal…

Our large tent, or teepee, was situated in the Lilac Zone, right inside the campsite’s perimeter. Furthest from the entrance, fairground and other attractions, we felt nicely secluded in a very quiet spot. 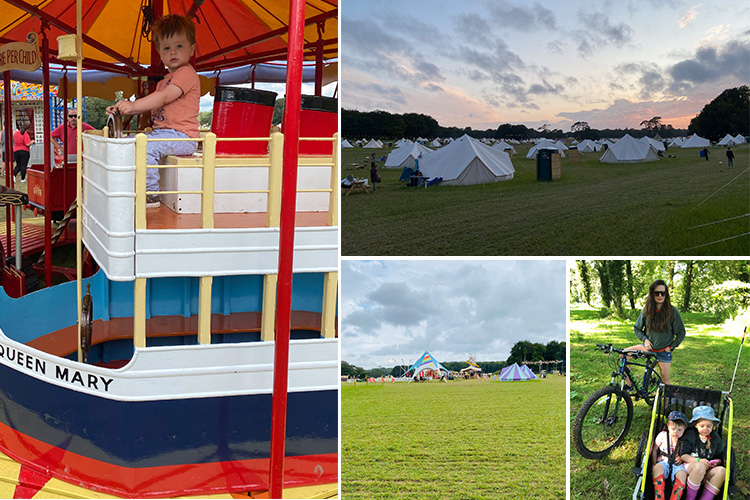 How glamourous was the accommodation at Cloud Nine?

Our tent was one of Cloud Nine Glamping’s Luxury Bell Tents, which sleeps up to six adults, so there was plenty of space for the four of us. It was a large tent that you could walk into and around in, a far cry from the sweaty, dark tents I remember having to crawl into and around in when camping as a teenager.

Our first impression on arrival was that it felt very… glamourous. Turns out I’ve been missing out ALL this time! We were greeted by a clean tent, both inside and out. In fact, it looked completely unused and in brilliant condition. I found myself breathing a huge sigh of relief. This might not be so bad, I thought, as I found a plug socket for my phone charger.

The tent housed a double bed made up perfectly with a big white 15 tog fluffy duvet and four pillows. Either side of the double bed was a little table, lamp, and magazine, with earplugs, a bar of fancy soap, and an eye mask. At the end of the bed was a table with a kettle, mirror, cutlery and supplies for hot drinks. The kids’ mattresses were on the floor, one either side of the bed with similar 15 tog single duvets and pillows that matched ours.

Outside of our tent was a decent-sized area that housed a firepit with a bag of coal, four large logs to sit on, and a picnic bench. We were fairly close to a block of showers, so everything essential was in good reach. The showers were clean with ample hot water, I found out the next morning at 6.30 am as I tried to avoid anybody seeing me, makeup bare in my joggers darting to and from the showers for a quick morning scrub. There’s definitely an art to showering in these cubicles, I thought, screaming with no sound as cold water spurted out all over me – but it warmed up really quickly, and I walked back to the tent feeling wide awake ready for the day.

35 Of The Best Family Friendly Pubs In Surrey For Summer

Things to do at Cloud Nine Glamping in Dorset

There are lots of things to do at Cloud Nine for all ages, including adults. The Dorset resort offers everything from silent discos, Yoga classes, gin tasting, to paddle boarding, Rugby Tots, Bubble Parties, laser tag, archery and pony trips. Dotted around the campsite we found little marquees holding pottery painting, art classes and more.

We hired two mountain bikes with a double bike trailer for the kids (who haven’t yet mastered the art of cycling), and had lots of fun racing each around the grounds.

The kids loved their adventures at Pony Dayz Riding School, situated just up the road from the campsite. They both got to groom and ride a pony each, as we followed them around the fields taking snaps of them in their hard hats. Photos for the memory banks. Pony Dayz is a brilliant riding school, with lots of beautiful rescue ponies, and a lovely team of staff that put the kids completely at ease. I mean, first time on a pony is a pretty scary big deal, right? The looks of concentration on their faces… And Maddie, my four-year-old, did not want to get off! 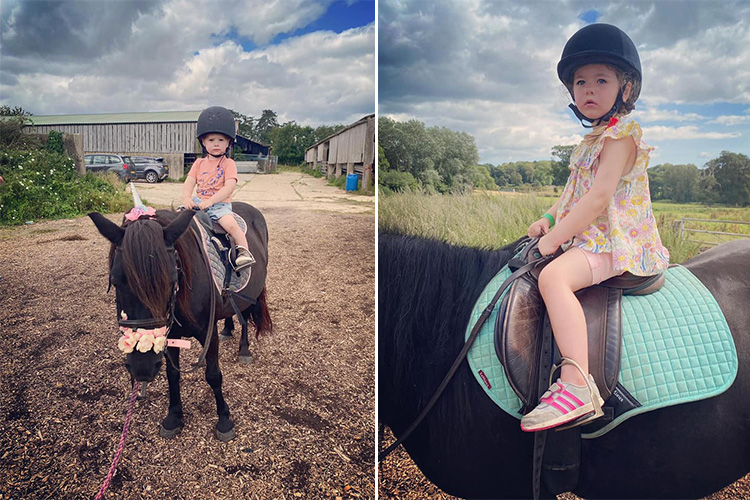 Back at the ranch, on the campsite, we found a whole host of relaxed and impromptu fun to be had in and around The Village Green. The bar and seating area overlooked three large trampolines and an adventure playground, so you could relax with a wine or a beer, while the kids enjoyed hours of fun playing with other children. We happened to bump into the one and only Andy Day by the slide, which made Maddie’s day. “I did not know Andy Day lived in this world!” she exclaimed, incredulously. Cue blushes all round.

The Village Green bar puts on entertainment throughout the week, and the kids were spellbound by pianist and singer Sean Keating, who dropped by for an hour or two, happily taking requests from the audience. Billy even got to play Twinkle Twinkle Little Star with Sean! 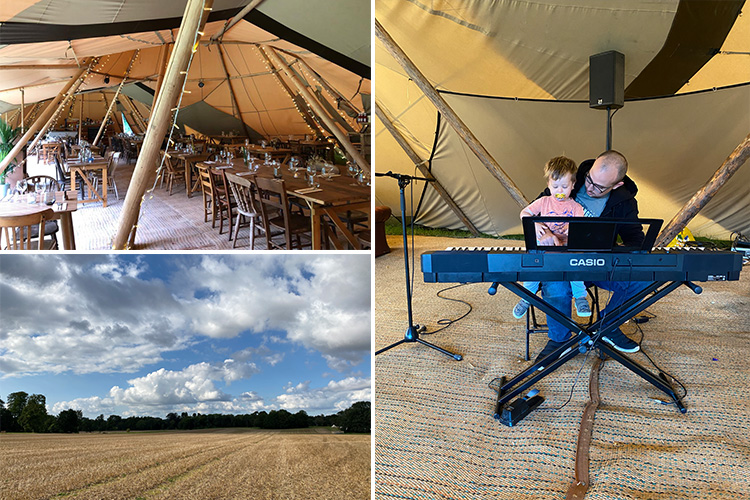 When it comes to feeding the kids and yourselves at Cloud Nine, we found plenty of choice on-site, together with a small shop for essentials. You can also bring in your own supplies and many families held BBQs and cooked breakfasts outside their tents using their firepits. There’s also a row of food outlets, offering everything from coffees and pastries, to burgers, delicious homemade pasta and sauce made from real basil, crepes and noodles from morning til night.

Beyond The Village Green at Cloud Nine in Dorset you’ll find the funfair, which has been very thoughtfully situated away from the accommodation and main areas of travel, and not in a place where you have to walk through it to get everywhere. You do have to buy tokens to ride the attractions, and quite frankly, after an hour and a half of my two-year-old refusing the get off the carousel and thirty-six tokens later, we were happy to avoid that particular area from there on in. He had the best time on that roundabout though, and he’d better remember it for the rest of his life!

At the back of the fairground you’ll find the lake, with a spa and retreat for adults, as well as the enchanted forest, and the site’s main restaurant and bar. We pitched up for dinner on the first night. The food and wine was absolutely delicious, but it was pricey, so it was a one-off treat for us.

Would I book Cloud Nine Glamping next year?

As UK staycations go, Cloud Nine Glamping in Dorset was a hands-down winner. Staff were always on-hand to help, nothing was ever too much trouble. Shout out to Ted The Pub Dog and his lovely owner who we met on arrival, as well as Sophie who helped organised our stay, and Zoe, the lady on patrol around our area.

The kids had an absolute ball, and even though being fairly young at 2 and 4, they found there was much to do. Wimborne is also a brilliant place to be for venturing further afield, with a plethora of Dorset beaches half an hour away, and lots of local pubs for lunches and dinners out.

As for me, my first experience of glamping was a success. I’m not saying I’m completely converted to the whole idea of ‘holidaying in a tent’ on a regular basis, but our stay at Cloud Nine was awesome fun and I’d love to do it again soon. I got chatting to some other families during our days there, and all of them had amazing things to say about their own experiences at Cloud Nine in Dorset. We were all in agreement, and as Andy Day put it “it’s brilliant here!”

For us, well, it was our first proper holiday as a family of four and we made precious memories we will all treasure forever. 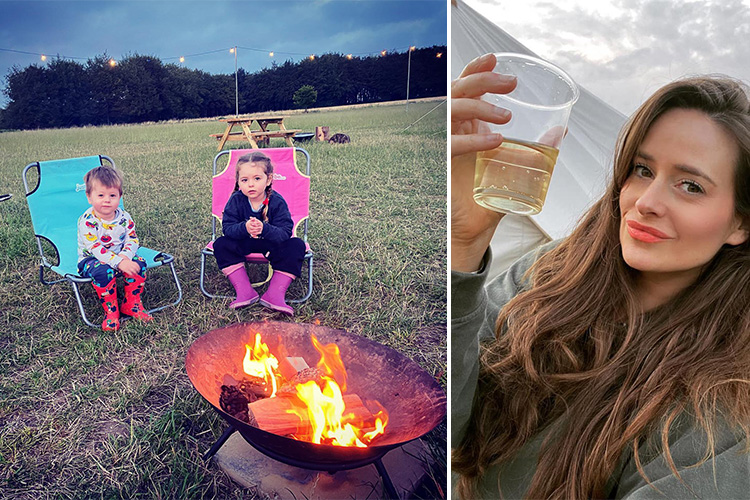 The Best Outdoor Toys For The Garden This Summer

The Benefits Of Outdoor Play And Recommended Toys For Summer