New NHS guidelines say couples struggling to have a baby should be offered fertility treatment more quickly, and older women should have greater access.

The National Institute for Health and Clinical Excellence (Nice) chief executive Sir Andrew Dillon said recent advances in fertility treatment had prompted a review of existing NHS guidelines. He said: “It is because of these new advances that we have been able to update our guidelines on fertility, ensuring the right support, care and treatment is available to those who will benefit the most.”

The National Institute for Health and Clinical Excellence says that IVF should be offered after TWO years of failed attempts, not the current three, and the upper age limit should rise from 39 – 42 in England and Wales. Guildeliness state that women aged between 40 and 42 should be entitled to one cycle of IVF, on the provision that it is their first time, and they have enough eggs.

The director of the Oxford Fertility Unit Tim Child, helped developed the guidelines, stating that ‘When a women reaches her mid-30s her fertility begins to decline, and even more so from her late 30s.

“Many women do conceive naturally in the 40 to 42 year age group. But for those who can’t, and who have been diagnosed with the medical condition of infertility, then improvement in IVF success rates over the last decade mean that we are now able to offer cost-effective treatment with a single IVF cycle.”

These guidelines may not, however, lead to changes as they are not binding. Some fertility experts have raised their concerns. Dr Sue Avery, a spokesperson for the British Fertility Society and from Birmingham Women’s Fertility Centre, told the BBC: “It’s good that there’s the possibility there, but the funding does not match. I can’t see any prospect of it happening immediately. Our biggest concern is hanging on to the funding we’ve got.”

The NHS currently funds around 25,000 IVF attempts a year, each costing £3,000. A survey in 2011 revealed a postcode lottery, with only a quarter of NHS areas funding the full number of cycles recommended by the existing guidelines.

“One of the reasons I love the Stokke® Sleepi™ is because like the Tripp Trapp high chair, it grows with your child. It might not seem important at the time but investing in just one sleep solution is not only more environmentally friendly, it makes life so much easier for you, and for your child as they grow and adapt to a bigger but still familiar sleeping area.” Says My Baba’s Leo. 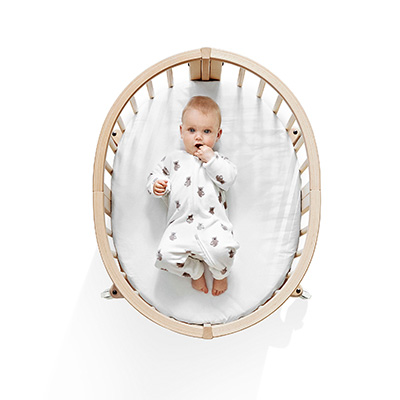 NEVER MISS A THING
Sign up to our newsletter and become a My Baba VIP now. Keep up-to-date with all things parenting, pregnancy and lifestyle. Never miss a story with our weekly newsletter, filled with the latest advice, fashion, product reviews, exclusive discount codes and more.
Your information will *never* be shared or sold to a 3rd party.