The team at Ladybird have been overwhelmed with hearing so many moving and inspiring stories from families during the pandemic. As a children’s publisher, Ladybird spends a lot of time talking about young children, but this summer, their Love Unfiltered initiative turns the spotlight on all the incredible people behind the names: “dad”, “mum”, “papa”, “nan”, “grandad”, to take a moment to celebrate them.

Ladybird found 21 parents, grandparents and carers each with an incredible story to tell. There’s Baff, whose girls love laughter so much that it’s made him funnier, and Huma, who describes how the small moments of love more than make up for the difficult times. Lauren and Khiana are two mothers still climbing mountains with their kids on their backs, while Erik’s decision to co-parent with his best friend has left him with a newfound respect for her and other mothers. And then there’s Mark, found through charity Young Lives vs Cancer, whose young son was diagnosed with Wilms’ Tumour.

Real-life experiences to make you laugh and cry, Love Unfiltered includes personal accounts of surrogacy, Caesarean births and single parenting to living with a disability, and caring for a child with cancer. Otchere’s powerful photography captures these very different family experiences in a photo series, to accompany the stories you’ll find inspiring and moving, as well as funny and uplifting.

To give you a preview of the series, here are just 4 of the stories and portraits featured.

Make A Splash With Our Pick Of Swimwear

“I met my wife on a ship where we worked together in the Navy. We were both deployed, but when we returned we were still interested in each other, thankfully! We had a little trip to London to celebrate our coming back and she just turned around to me in a restaurant and said, “I want to have children”. I pretty much downed my pint and said yes. We had our sons Ollie in 2015 and Harris in 2018.

It was the beginning of July last year when Harris’s nursery called us and said they’d found some blood in his nappy. We went to the hospital for a scan and later that same day we were pulled into a room and were told the news. Harris was diagnosed with Wilms’ tumour, a kidney cancer that primarily affects children. I just didn’t want to believe it.

Because of Covid, my wife and I weren’t allowed to bring Ollie or visit Harris in the hospital at the same time. So we took shifts at the hospital just like we had in the Navy: For Noon Watch, Into The Dogs, and The Night Shift. We just focused on getting to the end of every shift in the best way that we knew how. Other than messages and the occasional FaceTime it was hard to support one another; it was quite a lonely place. But at the end of a day in hospital we would stay in a Home from Home provided by Young Lives vs Cancer near to where Harris was being treated. It was a much-needed place to rest and recuperate before going back to the ward and meant we didn’t have the stress of staying and paying for hotels as we were far from home. The charity really helped us at a time we needed it most.

Harris’ operation was a success and we only needed four more weeks of chemo. Which, compared to others, made us feel lucky in a way. But as much as ringing the bell was such a good moment, I see it as the middle not the end of our journey. We still have to go to the hospital each week and we don’t want to make too many plans. For now we’re focusing on our upcoming family holiday to Newquay, swimming (which Harris loves), and spending time together.”

Mark is a Chief at the Royal Navy who tries to get out and play golf once in a while. He’s shared his story with us as part of his efforts to campaign for Young Lives Vs Cancer, the UK’s leading charity that helps children and young people living with cancer and their families. 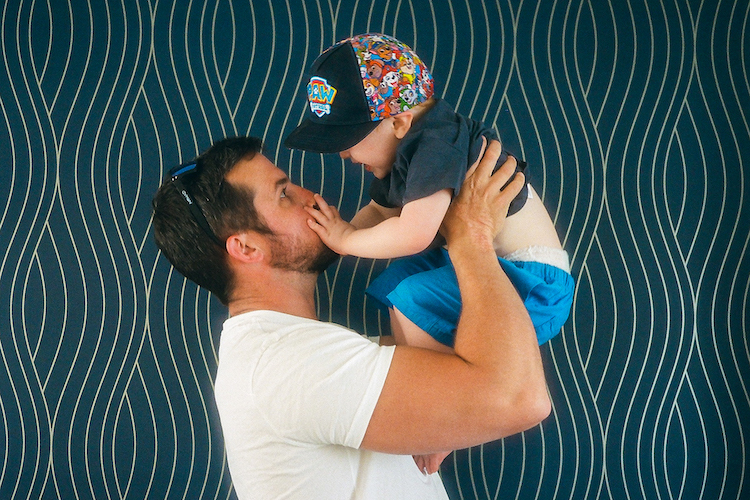 “I think we need to talk about birth experiences more. I’m into anything holistic and natural and so I’d always planned to have a water birth with candles everywhere and my music on. I was really positive about everything, and genuinely thought I’d enjoy the whole experience. But things didn’t go to plan.

I had a really long labour: 40 hours. It started out pretty normal but it got to a point where I wasn’t progressing, so I was moved from the birth centre to the labour ward. I’d really hoped to have a vaginal birth but in the end we were told we needed to have an emergency C-section. Obviously, I was exhausted and wanted to get the baby out safely; that was the most important thing to me. But it was a lot to go through – emotionally and physically.

When I first saw our baby, I thought “wow, he’s got a lot of hair!”. But also a sudden sense of needing to protect and hold him.  It’s only been six weeks since Sebastian was born but I’ve already got this new-found sense of patience. Newborns don’t know how to communicate and it can be hard when they’re crying in the middle of the night and you don’t know why. I think I was pretty impatient before. Now, I’m learning to communicate with him, as he does with me. Nobody knows what they’re doing at the beginning, and that’s the truth! You can read all the books and follow all the Instagrams but every baby is different.”

Linh is a jewellery designer with an eye for trends. After a brief stint in New York, she returned to London to be closer to her friends and family before the birth of her son. 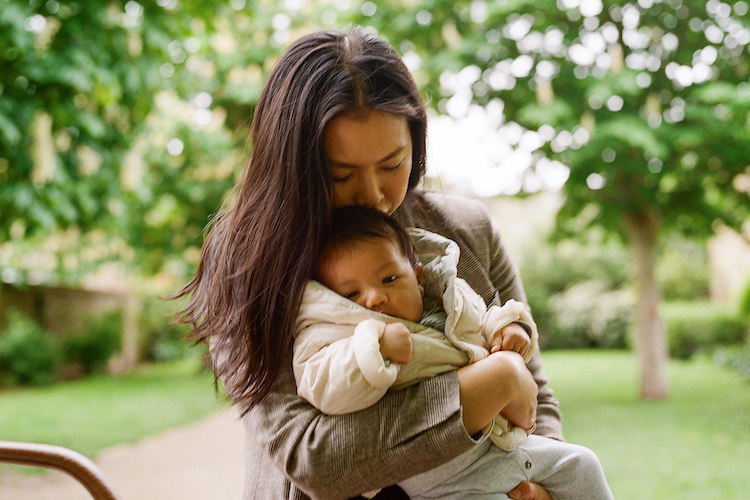 “Since becoming a Dad, I’ve become so much more understanding, caring and patient. But I also feel like I’ve become funnier!  Kids need joy, they always want to laugh. So when we’re doing things like cleaning the house I always make sure I get a tickle in there. I love making them smile. They make me want to be the best version of myself.

I always felt that being a Dad would allow me to pass on my “bad knowledge” as well as my good; what I’ve learned from my mistakes. I felt like it would be a great learning curve for me. And it has been.  They’re two little comedians who bring me so much joy.  From the first moment my eldest was born, I was filled with love. Tears pouring down my face. I didn’t know that I could be this happy.

It’s been difficult too. Especially being an entrepreneur and a father because financially you’re relying on yourself and then on top of that, your kids are relying on you too. You don’t know if it’s going to work out or not. Sometimes my kids come on the deliveries with me. They get to see how hard their dad is working. Even though you may think they don’t understand, I think it’s being embedded within them. It’s like my grandma used to say: “It’s not what you leave your children, it’s what you leave in them.”

Baff is an ex-footballer and the co-founder of Trap Fruits, the community green grocers that deliver fresh fruit to doors across London. 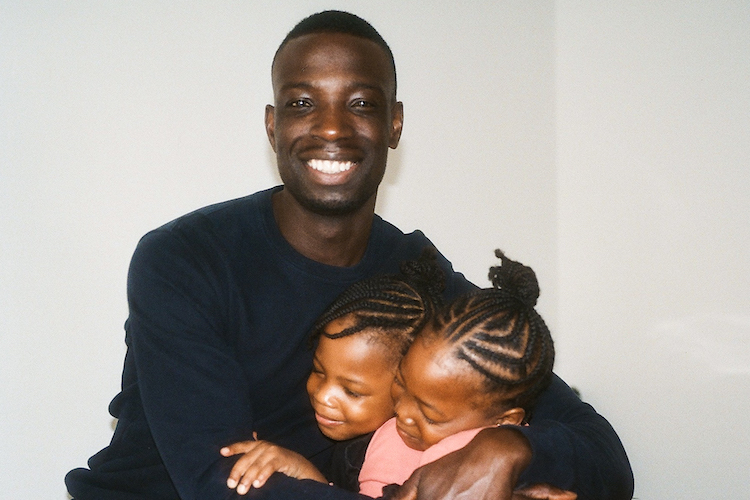 Our first experience of parenthood was a loss, at 16 weeks. There are so many parents who go through the same thing but it’s not something that gets spoken about often. It should be. I thought, “Are we allowed to grieve?” but of course we are.

We now have our daughter, Alleppey, and our son, Atticus. Before I was pregnant, I had this vision of pregnancy being a woman with a swollen belly prancing through a grassy meadow in a white dress. But we went to Iceland when I was pregnant with Alleppey and was throwing up on glaciers. It can be ugly, stressful and exhausting sometimes. But equally it’s awe-inspiring: you realise your body is amazing.

Before I had kids, I was a touring musician and Dan and I did lots of travelling together. But the world is still a big place once you have children; you can take them with you. When we travel as a family everyone’s extra welcoming. Everyone wants to say hi to the baby – it’s a different experience. And you see things through the kids’ eyes too. In the process of going, “look at that waterfall” or “there’s a parrot!” you start to look at things from their view up. It’s beautiful.

I work in film and I do a lot of work behind the scenes to advocate for women and mothers in the industry. Flexible working, job-sharing. I’ve dedicated ten years of my life to this career, and if having children means I need to work part-time for a couple of years, it doesn’t mean my qualifications are any less valid or my experience is void. I’ve been able to reconcile my creativity and my motherhood.

Ashleigh and her husband Dan both work in the film industry. When they’re not travelling the world with their children on their backs, they’re tag-teaming at home. 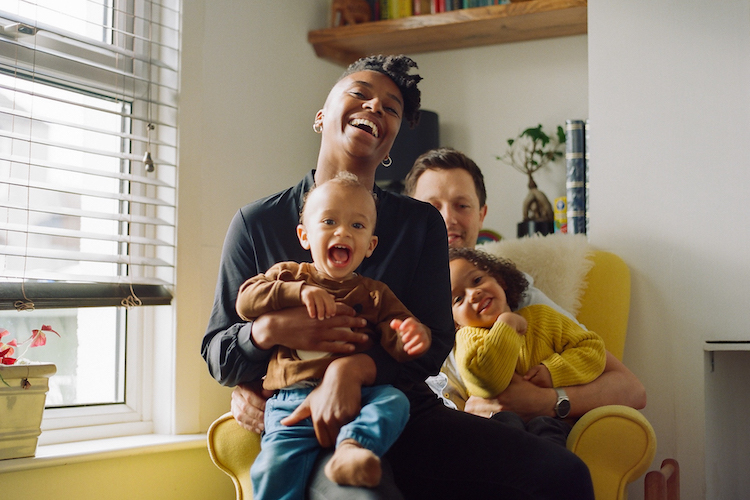 Ladybird’s Love Unfiltered photo series will launch online on 24 June on ladybird.co.uk and will be serialised on Instagram @ladybirdbooks.