Grandparents often tend to spend a lot of money on their grandchildren and I was really interested by this article that the guys at Studio INTO wrote for us on the toy market. In essence, it states that grandparents are one of the biggest consumers of children’s toys and it really got me thinking about this shift in present buying.

Did you ever wonder how LEGO develops some of the Duplo sets or the process behind the development of a Mamas & Papas’ buggy? Well, while products are being developed designers stumble across some interesting findings that can lead to some new opportunities.

As a design, research and innovation consultancy Studio INTO has worked in recent years on design projects with internationally recognised kids’ toys, apparel, food and furniture brands that are targeting mums and dads as buyers. ‘Behind the scenes’ the design process was creative and inquisitive: we’ve observed how kids and parents use and discard products; we’ve heard what they love about some brands and why they would never buy others. Finally after gaining a better understanding about you, the users, we started identifying new opportunities and designing products that respond to the kinds of behaviours of kids and parents that we’d been observing.

While doing all of this research and seeing how people are using the products we stumbled across some significant social changes. And one of the key things we noticed was that grandparents are buying and using kids’ products more then ever before! This was totally unexpected. Of course grandparents have always provided help, in a way this seems like nothing new, but in the recent years their role changed significantly. They used to take kids out for a walk, treat them to an ice cream, jump-in as a babysitter when parents were ‘stuck’ or just give the parents some time off from the children. Grandparents were providing ‘occasional care’. But now this has changed to providing more ‘regular’ or even ‘intensive care’, which means at least once or twice a week. Working parents rely on this help. We found that this regular care is taking place in the grandparents’ homes and they need everything you would associate with a regular day of a child: buggy, highchair, cot, crockery, kids cutlery, bibs, toys, and so on…

This is a significant social shift: grandparents are now prime users too. They used to buy kids’ products and give them to the parents of the kids, or as presents to the kids. Now they buy and use the products themselves, in their own homes, and out and about. Currently the kids’ products market mainly focuses on the mother/father and child. We have found that an opportunity is emerging to embrace the grandparent as the 3rd generation of users of kids’ products.

This becomes even more significant when we had a look at some statistics: English grandmothers have the most grandchildren across Europe. On average each British grandmother has nearly five grandchildren! That’s a lot of buggies and high chairs they would use! In addition to this, 63% of UK grandparents are ‘regular’ or even ‘intensive’ carers of their grandchildren!

We started to wonder ‘why is this happening?’ And found few reasons: one is austerity and raising childcare prices. Another is ‘supermums’: those mothers who are returning earlier to the labour market. Grandparents are key enablers here, as not only do mothers feel more comfortable leaving their little ones with trusted grandparents, but also having them as primary carers also reduces childcare costs, making working more profitable. An important factor too is the increase of life expectancy and how active grandparents are.

OK, but what does this mean for our design opportunities? I’m going to expand on one of the interesting behaviours we noticed that could propel ideas for new products. We asked ourselves: how do grandparents give to grandchildren? Sometimes they spoil, and sometimes they treat. Grandparents allow themselves to spoil their grandchildren just about twice a year, for Christmas and for birthdays. Spoiling however is seen as a bad influence and bad for upbringing and grandparents don’t want to be seen as a bad influence, in fear of disapproval by the parents! However, they get around this dilemma by giving their grandchildren ‘little treats’ all year around! ‘Little treats’ are purchases that grandparents buy with the excuse in the back of their minds: they need it! These can be clothes, basics like underwear, T-shirts, pyjamas, some everyday dresses, as well as stationery. Very often this ‘need’ is prompted by the parents: the parents might mention what the child might ‘need’ as it grew out of the pyjamas, or that they ‘need’ to buy some new crayons that have been lost. Grandparents jump onto situations like these as opportunities to give a ‘little treat’ while avoiding being judged as ‘spoiling’.

Another excuse they give themselves for treating is that the ‘treat’ they are buying is educational and will help the development of the child. In the back of the grandparents’ minds is concern about what the parents might think of the gift. An ‘educational’ treat is always a safe bet. In this category books are the most obvious present, but also colouring books, craft…

While a large proportion of pensioner households have low incomes, ironically, the retired account for the majority of wealthy Britons. The over-50s are the wealthiest and fastest growing group of consumers in the UK, and they are ready to spend their money on their grandchildren. These ‘little’ or ‘educational treats’ mentioned already, are only two of the opportunities we identified for brands to offer new products to grandparents. But of course there are many more. There are so many opportunities that user insights can lead us to while we are working on designing!

This is how the process behind the development of kids’ products looks like at Studio INTO: plenty of interaction with people and understanding of their wider social issues. Let’s start designing then!

Splish, splash, splosh, it’s paddling pool season and BABY Born’s NEW My First Swim Dolls are water-friendly dolls perfect for a summer adventure and pretend play.
By combining the warm weather with doll play in the pool or tub, little ones will have the ultimate summer fun with their new splash-tastic pal.

Suitable for toddlers aged one and above, children can take their My First Swim friends for an actual paddle! Simply wind up their arms and watch them whizz off in the water – with real swimming motions My First Swim Boy or Girl are total pros at front crawl and butterfly stroke! 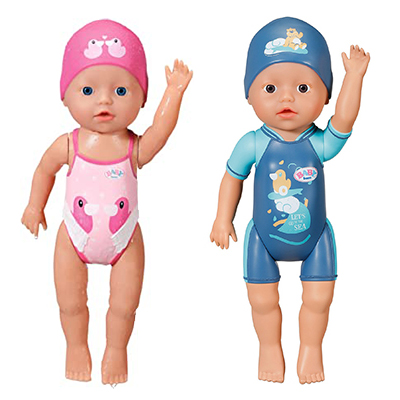