This year Spring Festival (Lunar New Year or Chinese New Year) will be taking place on 1st February.  Over the past year I have been learning Mandarin and about the Chinese culture, which I have been asked to share with my charges.  All though I can’t fluently talk to them in, I am able to share what I have learnt about the culture.  One of the big things I have learnt about is Spring Festival.  As part of that I have been showing BB all about Dragons, which is why we have been making Dragon Puppets.

Make sure you follow my Junk Modelling board on Pinterest for more ideas.  Don’t forget to save the pin for later.

To make your own Dragon Puppets you will need:

I am going to apologise because I didn’t manage to take one photo while we were doing this!

First cut your kitchen rolls into thirds.  Then cut a concave opening at each end, except for the rolls that you will use for the head and tail.  On each end use a pin to make a small hole, this is so that you can line the segments up and connect them with a split pin at the end.

Next paint and decorate your rolls.  Before we started, I showed BB lots of different pictures of Chinese dragons and we talked about the different means of them.  He decided that he want to make his a golden yellow one, just like the ones that the Emperors of China would have used (I am not surprised about that in the slightest).

When all your segments are ready, line up the pin holes that you previously made and connect them with a split pin.  It is rather fiddly.  If you find that the segments don’t move freely, then you may to make the concave slightly deeper.

On the bottom of your dragon make a slit in the first and last segment, then push a craft stick into those slits.  Those are for controlling the movement of your dragon.

Finally on another craft stick glue a pompom.  In the traditional dragon dances, the dragon would have followed a ball that was on a stick.

Dragons, Emperors, and the colour yellow

In Chinese culture the dragon is a powerful and benevolent symbol that was meant to control water.  They are nothing like the Dragons depicted in Western cultures (like St George and the Dragon).  Over time they came to symbolise the emperors, who were believed to be the Son’s of Dragons.  Ordinary people were not allowed to have any items with dragons on, they were exclusively used by the emperor.

Like with most things in Chinese cultures the colour plays a huge importance in the meaning of the dragon.  A black dragon is meant to mean vengeance, which is why it is often used as tattoos for Chinese gangs, a red dragon is lucky and good fortune, and a yellow dragon represents good fortune, wisdom, and power.

Legends say that when a dragon bleeds its blood is yellow, and because the dragon was the symbol of the emperor, over time the colour yellow also because the associated with them.

If you enjoyed making these dragon puppets, be sure to check out my koi fish paintings and Chinese lanterns. 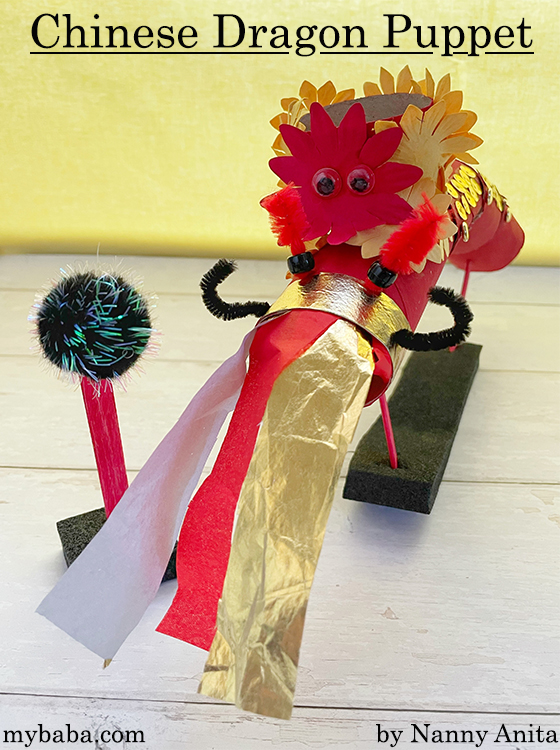