tonies® and My Little Pony are hosting a free and festive family day out with their Winter Wishday pop-up event happening this Saturday, 12th November from 12 pm – 5 pm, at the Coin Street Observation Point, Southbank, London.

At the Winter Wishday event, visitors will be invited to share special holiday wishes on the My Little Pony Wishday Rainbow LED screen, explore their very own uniqueness at the ‘Express Yourself’ stations, and even have the chance to meet Sunny herself!

TRENDING: A Guide To The Best Selling Kids Toys This Christmas

15 Brilliant Subscription Boxes For The Kids This Christmas

Goody bag prizes up for grabs

Take a little Winter Wishday magic home with fun-filled goody bag prizes up for grabs, and don’t forget to bring your dancing shoes! Music from the hit movie My Little Pony: A New Generation and the new series Make Your Mark will be the day’s soundtrack.

TV personality, entrepreneur and mother Sam Faiers will be in attendance with her daughter, Rosie 4, kicking off the event by entering the first wish on the Wishday Rainbow. Samantha Faiers says “We were thrilled to be asked to open this one-of-a-kind event for the public and kick off the festive season early with the magic of My Little Pony! We are such big fans and can’t wait to watch the Winter Wishday special episode on Netflix on Monday 21st November.”

My Little Pony’s Winter Wishday episode shows how the Ponies celebrate each other’s holiday traditions, and the event gives visitors the chance to share their hopes for the holidays while learning the importance of embracing cultural differences. Looking out for one another and togetherness are core values of the My Little Pony brand, and to celebrate this, they will be donating to Rays of Sunshine, a charity that grants magical wishes to seriously ill children.

Join Sunny and friends for this one-of-a-kind event, and start your festive season early with the magic of My Little Pony at tonies®. And don’t forget, Make Your Mark: Winter Wishday special episode, premieres on Monday 21st November, only on Netflix.

This is a free and ticketless event, so to avoid large queues, please ensure you arrive before the light switch on at 12 noon.

Sunny Starscout is a bright-eyed pony on a mission to unite Equestria. A hero determined to change hearts and minds, she believes Earth Ponies, Pegasi and Unicorns should all be friends. Will she succeed in making her world a better place? Listen along as the story unfolds and enjoy original songs from the popular film.

An enchanting world of imagination and adventure awaits with tonies® captivating Christmas collection set to thrill little listeners of all ages.

tonies® musical storybox is the perfect present for every child on Santa’s list, with a world of storytime, music and educational content just waiting to be discovered. 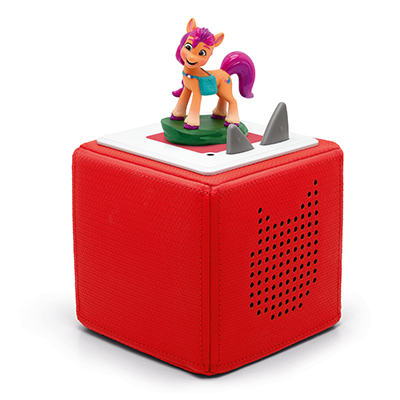 Shop The Best Kids’ Christmas Jumpers For The Festive Season